Windows were smashed and businesses were burglarized overnight at Brooklyn Center’s Shingle Creek Crossing shopping area. Brooklyn Center police believe the events were connected to the rioting and looting in Minneapolis after the death of George Floyd, a black man who died after he was held down by a white Minneapolis police officer. 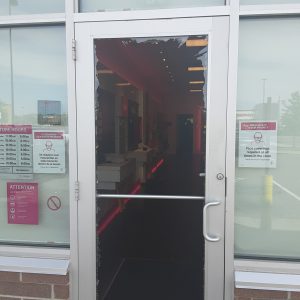 T-Mobile, one of at least four businesses burglarized overnight

Brooklyn Center police initially received a call at about 1 a.m. from Walmart staff about a significant number of vehicles arriving in their parking lot. When officers arrived, they observed about 50 vehicles driving around the parking area, said Cmdr. Garrett Flesland, a Brooklyn Center police spokesperson. The vehicles disbursed, but throughout the next several hours multiple business alarm calls were reported.

Multiple businesses reported break-ins and theft. Police say Foot Locker, T-Mobile, MetroPCS and Family Dollar were impacted. While responding to some of these burglaries, people were seen running out of the businesses. At least three arrests were made related to the burglaries, police said.

Officers were able to “stabilize these locations” overnight by blocking the entrances to Shingle Creek Crossing, according to a statement from Brooklyn Center police. 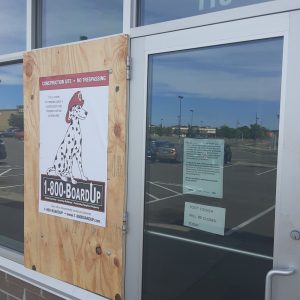 There are no reports of injuries related to the Brooklyn Center situation. CCX News is working to further update this story.