Federal officers have seized hundreds of counterfeit automobile tire pressure sensors that were bound from Hong Kong to a home in Brooklyn Park.

U.S. Customs and Border Protection (CBP) captured two shipments of 300 fake sensors at the Minneapolis-Saint Paul International Airport. The sensors, which were stamped with a counterfeit General Motors label, would have had a retail value of more than $28,000 if they were real. Customs officials announced the seizure on Wednesday. 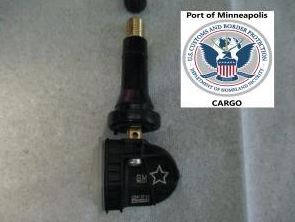 A spokesperson for CBP declined to reveal the Brooklyn Park address where the sensors were supposed to be shipped. But the agency says catching the fake sensors not only protects the integrity of the American economy, but also prevents potentially dangerous products from being installed in someone’s car.

“This underscores how counterfeiters completely disregard human lives and their safety while padding their bank accounts,” said LaFonda Sutton-Burke, director of field operations for the CBP’s Chicago Field Office.

The CBP says halting the importation and sale of counterfeit items is one of its top priorities. The agency says officers have seized counterfeit handbags, jewelry and apparel, among other merchandise, around the country.

According to the CBP, the agency works to enforce federally registered copyright and trademark filings at the border and ports of entry. As of Sept. 30, 2021, CBP enforced more than 20,000 active recorded copyrights and trademarks. In fiscal year 2021, CBP seized more than 27,000 shipments with intellectual property rights violations. If the seized products were genuine, the total retail value of the items would have been more than $3.3 billion, the agency said.