An Otsego family is complete again after half a year of searching for their 2-year-old dog, Rosie. The shepherd-husky mix ventured the streets after the Saarela family was displaced from their home.

Catrina Saarela said she woke up to a house fire in December of last year. Because Saarela’s house was a total loss, Rosie went in the care of a relative in Brooklyn Park. However, during Rosie’s stay she escaped through the back yard. 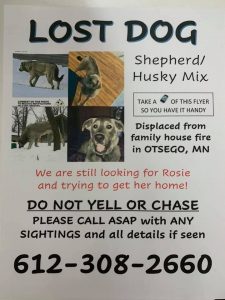 “I literally was driving home and a block from my house, I was like ‘whoa is that a coyote I saw?'” Jacobson recalled.

Jacobson never met Saarela but had the urge to bring Rosie home.

“She took so much off of us by taking over the search for Rosie,” Saarela said.

Jacobson and the Brooklyn Park community rallied behind Saarela’s family. The group set up food stations, cameras and signs.

“That was the biggest part of it, putting up signs and just getting the word out there,” Jacobson said.

A Facebook page was also set up for Rosie. On June 12, Jacobson and others decided to build a live trap which included cameras, food and a trail. Residents took turns on standby. 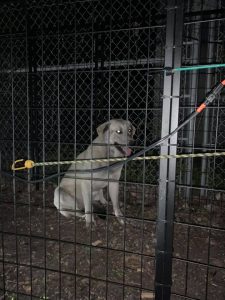 Rosie in the live trap.

“I answered the phone and I could hear Rosie barking in the background and (Jacobson) was like you have to come now we got your baby and I was like ‘oh my god, I’m on my way!'” Saarela remembers, while wiping her tears.

Emotions poured as Saarela’s family reunited with their pup.

“I saw her scoot her paws forward and I knew then she recognized them. It only took six minutes,” Jacobson explained.

Saarela called the experience magical. Although the journey was heart-aching, Saarela said she gained a new best friend along the way.

“Robyn’s like the guardian angel sent to protect our family,” Saalera said.

If you find a lost pet, call 911 where law enforcement can take the pets to the Pets Under Police Security (PUPS) facility.