The Northwest Coin Club had to cancel their annual money show at the Earle Brown Heritage Center due to COVID-19. Cancellations like these have ripple effects because people aren’t traveling and bringing money into the area.

The Northwest Coin Club recently had to cancel their 86th annual Money Show at the Earle Brown Heritage Events Center. They weren’t special in this regard. By last weekend all public gatherings had been cancelled throughout the state. But for every one event cancelled, the ripple effect on business, the economy and peoples lives is exponential.

“We had, we have about 80 dealers that are coming in. And some of them are coming in from out of town,” said Tom Styczinski of the Northwest Coin Club.

He was in charge of calling each of the dealers who had bought a table at the show and let them know that the show wouldn’t go on.

“Some of the dealers were just devastated that the show was cancelled,” said Styczinski. “I talked to some dealers, and all shows pretty much around the country are cancelled. There are people that just make their living going to different shows and setting up and selling stuff.”

Styczinski says they’ll be out of a job until the coronavirus outbreak subsides. But the coin club has already turned attention to the next show. 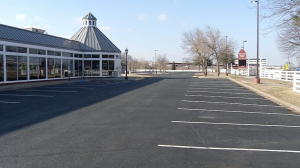 Several event centers, like the Earle Brown Heritage Center, are dealing with cancellations and a loss of revenue.

Events centers, like the Earl Brown Heritage Center also hosts numerous weddings, conventions, business meetings and trade shows. These require support staff, catering, and a host of behind the scenes employees who are no longer at their jobs. Events planners are also grappling with cancellations and rescheduling.

“99 percent of what I do is in-person live events,” said Mary Christensen who plans events with Dynamic Association Services.  “Because so many events have had to be cancelled it really ranges. Some of the monthly meetings may have anywhere between 40 and up to 150 people, so those would have been scheduled at local hotels. I have had to cancel two conferences. So one was scheduled at the convention center another was at a local hotel her in town. And those were between 5 and 6 hundred attendees each.”

“It isn’t just about our individual event or program. It’s at each place that we were going to be, the ripple effect of every person who works there, every person who touches an event that happens,” said x.  “There’s not just our staff people.”

For the latest on news from your neighborhood in the northwest metro check back often with CCX Media.