‘Emerging BC’ Group Looks to Build a Better Brooklyn Center

More than 32,000 people call Brooklyn Center home. And for some of those residents, they’ll tell you the city has had its fair share of challenges.

“The experience, particularly in Brooklyn Center, has not been an equitable one for our residents of color,” said Julie Bourque, a member of Emerging BC. “The door has not been wide open and welcome. People have landed here for various reasons, but they’ve not been welcome here.”

Bourque is part of a 40-person cohort called Emerging BC. It’s a group on a mission to help build a better Brooklyn Center.

Sean Garrison, a local artist, is also part of the cohort.

“How do you continue to attract and become a more diverse population, and how do you make people who come here feel at home and want to stay?” Garrison said. “Because that’s what makes a rich community, right?”

From Brooklyn Center to the Big Apple

To help answer those questions, the group recently took a trip to New York City for a learning experience centered around race and equity.

“We looked at a lot of the different places where people were basically pushed out,” said Leigh Adams, another member of Emerging BC. “And the word “displacement” was said a lot from our tour guide. That word has a whole different meaning to me now. It’s very hurtful. It’s very painful. It’s almost like calling someone the ‘N’ word.” 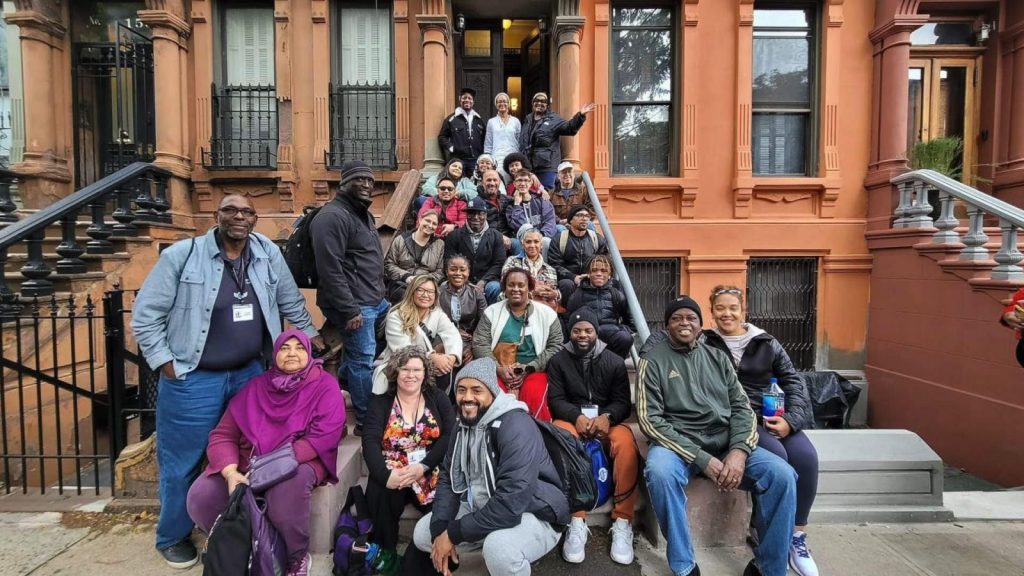 Members of the Emerging BC cohort during their October trip to New York City.

The group visited famous landmarks such as the Apollo Theater in Harlem, Central Park in Manhattan, and Ellis Island, the former gateway to America where 12 million immigrants were processed as they entered the United States.

“Somebody made the expression when we pulled up at Ellis Island, ‘this isn’t for our people, this isn’t what our people’s history is because this isn’t how we got here,'” said Bourque. “And I carried that as I went through the entire journey.”

One of the biggest takeaways of the four-day trip, which was funded by a grant, is for the group to work toward building a culture of respect.

“We’re not always going to agree,” said Adams. “We’re not going to always, you know, be for this or that, but we should be able to have reasonable respect for one another.”

In addition to New York, the Emerging BC group also plans to visit Flint, Mich., and New Orleans.