The early June hot weather is causing issues at local lakes that officials don’t typically see until later in the summer.

Wednesday morning, there were many people at the French Regional Park beach along the north shore of Medicine Lake in Plymouth trying to cool off. The lake is already contending with algae blooms, which pop up as temperatures rise.

“Since a lot of the lakes in the metro have a lot of phosphorus already, when you get these warmer temperatures, those are conditions that are optimal for algae growth,” explained Brian Vlach, senior manager of water resources with the Three Rivers Park District.

Vlach says these particular algae blooms are harmless, but other types can cause health problems to both people and pets.

“We shower when we get home, we rinse off, and we use those little rinse things. We haven’t seen any problems,” said Plymouth resident Jessie Westlund.

The Three Rivers Park District closed French Regional Park beach last Wednesday for 24 hours after some beachgoers complained about swimmer’s itch. The condition is caused by a microscopic parasite that tries to burrow into the skin when contacting a swimmer.

“When we close the beach, we wind up treating the swimming area with copper sulfate. Copper sulfate kills the parasite,” said Vlach. 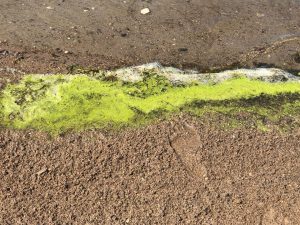 Officials also see an increase in E. coli levels at some beaches due to the rise in temperatures. They would typically see this in late summer.

Because the geese are now basically moving around, they like to seek residency on our beaches in the evening, so the geese feces are a source of the E. coli,” explained Vlach.

However, officials say the water levels are safe currently.

“It’s a beautiful day, and with the warmer temperatures, it’s just a wonderful place to visit,” Vlach said.