The parents of Maria Pew, Lissa Weimelt and Bill Pew, are sharing more about their daughter, who died in a domestic violence incident in Maple Grove in the spring. They have formed a nonprofit called Maria’s Voice to advocate for several issues surrounding domestic violence.

Like any modern-day parents, Bill Pew and Lissa Weimelt have a large collection of photos of their daughter. The pictures show the days of Maria’s cheerleader competitions, where Maria would be a fearless flyer. Lissa remembers watching cheerleaders toss Maria at one event so high that she was afraid Maria would hit the lights in the gym. There’s pictures of boating and fishing up north. There are always pictures with dogs. 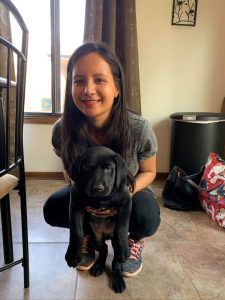 Maria with her dog, Rocky.

But it wasn’t until recently that Bill and Lissa noticed there are few photos where Maria is not smiling.

“There’s hardly a picture without a smile,” said Bill Pew. “I knew she always smiled in pictures, but until I go back and went back, she was smiling in every picture.”

“Were there signs? Yeah, now that we know the signs, there were a lot of them,” said Lissa Weimelt. “But did we ever in a million years think he would kill her? Of course not.”

Bill and Lissa don’t share photos of the man their daughter married after a year of dating.

“She was a very confident person,” said Lissa. “She told us, I’ve got this. I’ve got it under control. We’re working on it.”

The newly married couple had relationship problems, and Maria’s parents believe the isolation and stress of the coronavirus only compounded them.

“We are not ashamed of Maria’s death. We are heartbroken. We’re to our knees about it, but I’m not ashamed of it,” said Lissa. “The only way I’d be ashamed about it is if I did nothing about it.”

Lissa, Bill and a host of family and friends are doing something about it. They’ve formed a nonprofit and advocacy organization called Maria’s Voice.

“We have a clear voice in our head, it’s Maria’s Voice,” said Lissa. “Maria always wanted to change something and we could make a change. Number one, we wanted to change how the media talks about a victim.”

“Our goal ultimately, as a family, is to open a conversation that has a societal shift in preventing domestic violence,” said Lissa.

Should Maria’s parents waver in their commitment or their focus, Lissa says there’s a contact motivation that keeps them going.

“She lets us know, Mom get out there, get to work, quit crying,”  said Lissa. “Or  c’mn dad, pay for that. We have an angel on our shoulder.”