It’s not often that there’s this much snow on the ground in the Twin Cities in mid-January.

While it’s wreaked havoc on the roads, it’s created perfect conditions for people who want to bring their snowmobiles onto the trails.

“People are eager to get their machines out and ride,” said Alexander Birdsall, a conservation officer with the Minnesota DNR. “There’s over 22,000 groomed trails in the state of Minnesota along with the countless ditches and lakes that snowmobilers can enjoy.”

But according to the DNR, not everyone has enjoyed their snowmobiles responsibly this season.

“So far we’re already at multiple fatalities for the year on snowmobiles, and we’ve reached last year’s numbers,” Birdsall said. “And we’re already, not even halfway through January.”

Preliminary reports indicate that six people have died so far this season, for reasons such as drinking and driving, not knowing the trail on which they’re riding, and snowmobiling too fast. 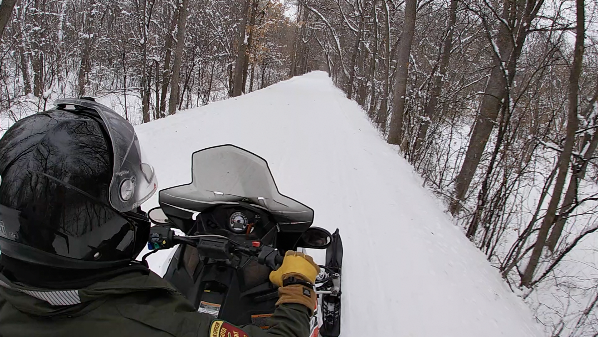 A DNR Conservation Officer rides a snowmobile along the Luce Line Trail in Orono.

“Fifty miles per hour is the statewide speed limit, so we keep our speeds down,” Birdsall said. “We ride together and we don’t drink and drive. Those are great ways to mitigate the risk of being involved in a crash, and worst case, a deadly incident involving snowmobiles.”

With a long weekend ahead and moderate temperatures in the forecast, the DNR expects the trails to be busy in the coming days.

Their hope is that snowmobile riders exercise caution so they don’t end up being another statistic.

“Stay on the trail. Stay on the lakes, and stay on property that you have permission to be on,” Birdsall said. “And we can avoid issues as a whole for snowmobilers.”

Meanwhile, DNR officials say a snowmobile safety course is required of anyone born after Dec. 31, 1976 and recommended for everyone. People with snowmobile safety certification are less likely to be involved in serious or fatal crashes. More information is available on the DNR’s website.

Related: ‘This Snow Is Welcome’: Precipitation Expected to Help with Drought