A Crystal man has been charged in the shooting of a Brooklyn Park police officer, the Hennepin County Attorney’s Office announced Monday. 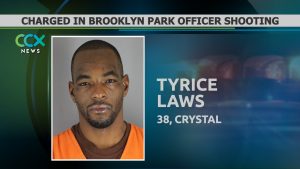 According to the criminal complaint, the mother of Laws’ children observed a vehicle pull into her driveway in Brooklyn Park from her livestream security video while she and her children were not home. Laws called her and demanded to see the children, the complaint said. The woman then called 911 to report a violation of a protection order against Laws.

Two Brooklyn Park officers in separate squads responded and approached Laws’ vehicle from each side, the complaint said. Neither officer had their weapon drawn as they approached. That’s when Laws got out of his car, reached into his vehicle and pulled out a handgun, pointing it at one of the officers, the complaint said.

Laws fired his gun five or six times at police with the first shot fired 5 to 7 feet away, the criminal complaint said. Both officers returned fire with the injured officer falling to the ground. Laws ran and retreated into the back yard of the residence. He was eventually arrested about a half hour after the initial encounter with police.

A police spokesperson told CCX News that the Brooklyn Park officer shot is now recovering at home. His identity has not yet been released. The spokesperson says the officer sustained a gunshot to the hip and was treated at North Memorial Health Hospital in Robbinsdale.

Laws was also shot in the exchange of fire. He sustained a gunshot wound to his left biceps.

The Minnesota Bureau of Criminal Apprehension reviewed both squad video and body camera footage during its investigation, which is ongoing. Laws is expected to make his first court appearance Tuesday afternoon.

A Brooklyn Park police officer was shot and injured after responding to a report of a domestic disturbance Friday night.

Officers responded to a home in the 6500 block of Georgia Ave N. just after 10 p.m. Police had learned the situation involved a man who had an order for protection against him. Police say the officers initiated contact with the suspect who was parked at the 911 caller’s home.

The Bureau of Criminal Apprehension is currently conducting an independent investigation, police said.