Deadline Alert: Fish Houses Need to Be Off Ice by March 2

The late February thaw has people thinking spring. But ice fishing on Medicine Lake continues. Despite the recent balmy weather the ice is thick enough to support cars, trucks and portable fish houses.

Joe Harty runs Harty’s Boatworks on Medicine Lake. When he used his power auger on Tuesday to drill a hole through the frozen surface and measure ice depth, Harty discovered the lake had 22 inches of ice.

After a slow start to winter, things have picked up for Harty’s business. 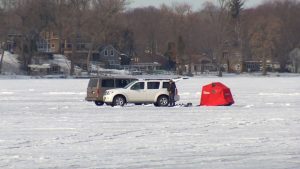 “Back in December it was terrible,” Harty said. “January things started getting back to normal. As soon as they could start driving out, it’s back to normal.”

According to DNR regulations, fish houses have to be off the ice by March 2.

Because of frequent temperature fluctuations, it’s been a yo-yo winter for Harty’s ice fishing business.

“It turned out pretty good,” Harty said. “Could have been much worse. All those warm-ups that we had, that doesn’t help. But it’s still a darn good layer of ice out there.”

The same can’t be said for local rinks.

At North Lions Park in Crystal, the skating area is chock full of rough patches. After a few days of a freeze-thaw cycle, skating is no longer an option.

Of course, with March just days away, Harty wants to make sure no one gets fooled by ice depth. He says it’s crucial people don’t assume that lake ice is safe.

“It’s getting to the point now again where it’s like early ice,” Harty said. “Have your picks around your neck. Have cleats on your boots. The diehards that go late, better bring a life jacket. You never know.”

Besides the February thaw, there was another sign of spring on the ice. A bicyclist was spotted pedaling on the still frozen Medicine Lake.