During the early morning hours of Dec. 31, 2019, a dozen plows from the City of Crystal hit the streets to remove four inches of snow that fell the night before.

One of the drivers came across a home at the corner of 62nd and Florida Avenue.

“[He] observed what he thought looked to be a suspicious yellow color coming out of the window,” said Crystal Public Works Director Mark Ray. “He pulled up, took some time to observe what’s going on. About that time, the window actually exploded out and he saw the flames extending out the window. At that point in time, he used his radio to contact me to notify me of the fire as it was approaching the home.”

Ray described that incident at a news conference on Dec. 31. He went on to say that the employee provided warmth and comfort to the resident of the home as they waited for the fire department.

“I’m extremely proud of our employee,” Ray said. “He’s definitely reflective of the compassion we have for our residents here in the City of Crystal.”

While the employee’s plow was present at the news conference that day, the driver himself didn’t want the attention.

“I told him about our little interview today and he thanked me graciously for not bringing him out here,” Ray said.

But on Tuesday, Feb. 4 at Crystal City Hall, Crystal Public Works employee, John Nelson, received the Chief’s Commendation from the West Metro Fire-Rescue District during the city council meeting for his actions that day. 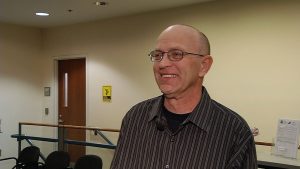 “My role [that day] was actually quite small, but I do appreciate that we worked together as a unit,” Nelson said, after receiving the honor. “And before you knew it, help was on the way and we were able to get things under control.”

“Certainly anybody else in that situation would have done the same thing,” Nelson said.

Investigators from the West Metro Fire-Rescue District say the New Year’s Eve house fire was the result of a candle that tipped over in the basement.