The Crystal police chief recognized three police officers at a medal ceremony during the city council meeting this week. Chief Revering says a recent call to an apartment complex is an example of what officers face every day. 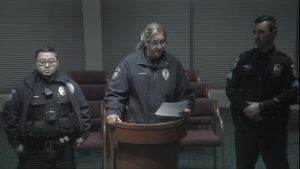 On September 22nd of last year, officers responded to more than one welfare check to the same apartment in the 3000 block of Sumter Avenue. They soon realized a 2-year-old child was in danger and tried to communicate through the door with a woman to get inside the apartment.

“She made comments that she would stab or throw hot water on whomever came through the apartment,” said Revering. “Officers could hear the person sharpening knives, and she said c’mn, I am sharpening all of my knives for each and every one of you.”

The chief said officers forced their way inside, and found the woman holding the child at knife point. Over a harrowing 75-minute time period, officers calmed the woman down and rescued the child unharmed.

To listen to the city council meeting where the officers received their medals, click here.