The Minnesota Bureau of Criminal Apprehension has identified the Crystal police officer struck last week by a suspect driver and hospitalized following a police chase.

The BCA says Jessica Donahue was injured during the July 16 incident. According to a criminal complaint filed, Donahue suffered serious hematoma or deep bruising to her right leg. She has since been released from the hospital.

“It’s horrific. This is horrible. This is something that police departments do not want to see happen,” said Crystal Police Chief Stephanie Revering last week during a press conference. “Our officers every single day put their lives on the line for communities that they serve.”

The investigation also revealed that Donahue was the officer who discharged her firearm trying to get the suspect vehicle to stop after she was run over. No one was hit by the gunfire. Donahue, who is on standard administrative leave, has been with the Crystal Police Department for 19 years. 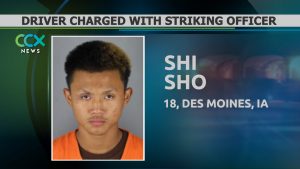 The vehicle pursuit first involved the Minnesota State Patrol when a trooper tried to pull over the suspect for speeding on I-94 near Highway 169. The pursuit eventually made its way into Crystal where squad cars were able to ‘box in’ the fleeing driver. The criminal complaint says the driver eventually went in reverse knocking Donahue to the ground. Cell phone video obtained by police appears to show the driver running over Donahue’s legs, the complaint said.

The BCA says its investigation into last week’s incident continues