An 18-year-old suspect from Iowa is accused of leading State Patrol troopers on a chase before striking and injuring a Crystal police officer.

Shi Sho, of Des Moines, Iowa, was charged Friday afternoon with second-degree assault with a dangerous weapon and fleeing police in a motor vehicle. Two other occupants of the vehicle, both juveniles, are also in police custody.

The police pursuit happened Thursday shortly after  1 p.m. when a State Patrol trooper attempted to pull over a vehicle for speeding on Interstate 94 near Highway 169 along the Brooklyn Park/Maple Grove border. The vehicle failed to stop, leading to a chase, according to information released from the Minnesota Department of Public Safety. 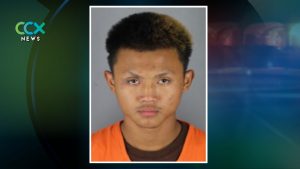 Shi Sho, 18, is the accused driver

The fleeing vehicle eventually wound up in Crystal. Troopers with the Minnesota State Patrol and officers with the Crystal Police Department boxed in the suspect vehicle near West Broadway and 57th Avenues. The suspect started “ramming squad cars with his vehicle,” the complaint said. As authorities moved in to make arrests, the vehicle attempted to flee again.

“It’s horrific. This is horrible. This is something that police departments do not want to see happen,” said Crystal Police Chief Stephanie Revering during a press conference Thursday evening. “Our officers every single day put their lives on the line for communities that they serve.”

Officer “Doing Okay,” Will Be Released from Hospital

Revering told CCX News Friday that the officer suffered an injury to her right leg, but will be released from the hospital Friday afternoon.

The criminal complaint describes the injury as serious hematoma, which is really deep bruising. Revering said the injured officer’s name could be released next week as the Minnesota Bureau of Criminal Apprehension completes its investigation.

Several police vehicles were also damaged in the incident. The officer who fired the weapon is on standard administrative leave.