UPDATE: The Crystal family says their dog, Mona, and the stolen car have been found. The reunion occurred Wednesday afternoon with the dog reportedly just fine and excited to see her owners. Someone living at an apartment complex a few blocks from the gas station where the car was stolen called police to say she saw a vehicle with the matching description and the puppy inside.

Plymouth Police Search for Car Stolen with Pet Inside

Someone stole a car at a Plymouth gas station with a family’s pet inside. That Crystal family now is asking for their dog back.

The incident happened shortly after 6 a.m. Tuesday at the Holiday station off Highway 169 and Rockford Road.

Topher Vargas was on his way to drop off his dog, Mona, at a doggie daycare when he stopped to get gas. After pumping gas, he ran inside for a quick second. When he returned, Mona and the car were gone.

Rachael Klosowski says her husband was pumping gas into their 2014 black Mazda 3 hatchback and left the car running. The vehicle has a keyless start, so the thieves don’t have the keys.

“The car will stop once it is in park, or they stop for whatever reason,” explained Klosowski. 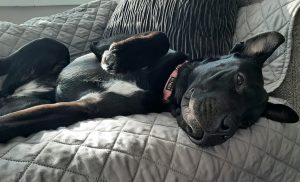 Mona, a 10-month-old black Lab mix, weighs about 50 pounds. The family got Mona as a puppy so she could be raised with their toddler daughter.

Now, they just want their pet back home.

“I’m assuming she’s very panicked. She’s used to sleeping in my bed at night. So this will be the first night that she’s either: A: on the streets, or still locked in that car somewhere,” said Klosowski.

Plymouth police are actively investigating this case. The vehicle’s Minnesota license plate number is NKF-743. Anyone with information can call the Plymouth Police Department or Lost K9 at 651-442-5308. The family is offering a $1,000 reward.