At Reflections Barbershop in north Minneapolis, customers come to get a clean look from barber Zachary Smith.

But there’s something else that Smith sells at his barbershop beyond haircuts.

“We have two products right now,” said Myles Wilson, a 15-year-old student from Brooklyn Center who attends Cooper High School. “One is an all-natural air freshener blend and a Doo-Pouri brand.”

Those air fresheners sit in a display case at Reflections Barbershop. They’re the first two products of Wilson’s company, The Bros. Code.

“I started Bros. Code, it is an all-natural air freshener and toilet freshener, using essential oils and natural ingredients because I want to make something that still smells really good but doesn’t have the same chemicals and side effects the big companies like Febreze and stuff can have,” Wilson said. 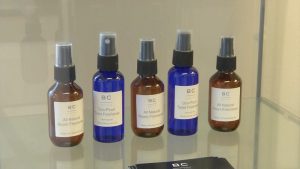 The Bros. Code line of air freshener sprays on display at Reflections Barbershop in Minneapolis.

The company officially launched in October, and in that short time span, Wilson has been able to use his entrepreneurial spirit to get a head start in the business world.

“A lot of my friends are starting to get jobs and stuff at fast food places,” Wilson said. “And I had already been to a couple of entrepreneur workshops, so I somewhat knew about it and I was like ‘hey, let me start my own business instead of working for somebody else.'”

Wilson and his brother, Xylen, go to malls on the weekend to sell their products.

“We’ve had six events now, which have all been very successful,” he said.

The success they’re having now will have long-term implications for the future.

“We’re saving up for my future right now to go to a college,” Wilson said. “I really want to be an engineer, because I like just building things and just using my brain to do great things.”

Six months after launching, The Bros. Code is off to a solid start.

“So far we’ve sold a lot of bottles,” Wilson said. “I’m happy to see my product in a lot of people’s homes.”