Sonder House Apartments is a $35 million project that will consist of 127 units on the old Jerry’s Foods site in Brooklyn Center. The affordable housing complex should open in April of next year. 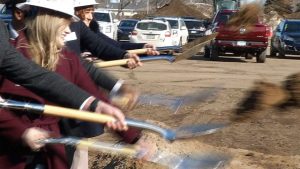 City manager Curt Boganey says if there’s one property he’s been asked about the most since his time as city manager, it’s the old Jerry’s Foods site. The property has been vacant for a few decades.

“I don’t think there’s another property in the city of Brooklyn Center that I have had more residents ask me about since I have been city manager. When’s something going to happen at Jerry’s Foods? Now I can tell them,” said Boganey. “We’re just excited to see this project. We think the developers for this project are excellent. They have a great reputation.”

The Sonder House Apartments are truly at the center of Brooklyn Center. Residents will be able to walk to the bus stop, grocery store, and other nearby shops.

“We love this location,” said Patrick Ostrom with Real Estate Equities. “The proximity to all the nearby amenities like retail, grocery stores within walking distance made us interested in the site.”

Development will continue nearby. A 143-unit apartment complex for independent seniors will go up next to the Sonder House. That will be phase two of this project and construction will begin on that in April.