One week after the Metropolitan Council and Hennepin County Board approved the METRO Blue Line Extension light rail route between Minneapolis and Brooklyn Park, supporters of the project are now working to get others on board with the plan, which faces opposition from two key cities the trains would serve.

Officials from both Crystal and Robbinsdale have voiced their concerns over the new route, which would bring light rail trains down the center of County Road 81.

“Not unusual that at this point in time, there’s entities and cities that we work with that have concerns and questions and are worried,” said Dan Soler, a senior program administrator with Hennepin County. “Our goal, as we get to municipal consent, which is probably about a year away, is to get a design pulled together that the cities are comfortable with.”

Discussing the design elements along the route was one of the main goals of a Blue Line Extension tour Wednesday afternoon. 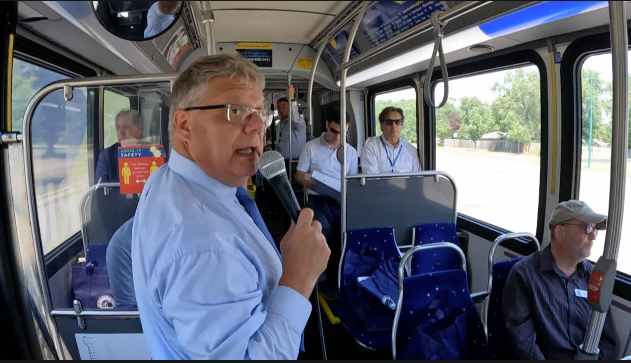 Two buses filled with stakeholders from the different cities impacted by the Blue Line drove along the route while project leaders talked about some of the design proposals.

Those proposals include building a new park and ride lot in Robbinsdale, and reducing the number of traffic lanes on County Road 81 in Crystal.

City officials in Crystal say more study needs to be done about whether four or six lanes is the appropriate design.

“I think we have consensus on the council that north of Bass Lake Road, four lanes might be adequate,” said John Sutter, Crystal’s community development director. “But the traffic volumes and the patterns are different between Bass Lake Road and [Highway] 100, and that’s where our concern lies.”

Hennepin County officials say they’re not sure what will happen if they don’t get municipal consent, because they’ve never faced that with any previous light rail projects.