Federal transportation officials are trying to determine what caused more than 20 Canadian Pacific train cars to derail in Plymouth Sunday afternoon. Plymouth police say the incident happened at around 1 p.m. near Northwest Boulevard, north of Schmidt Lake Road and just east of Interstate 494.

Canadian Pacific Railway crews are working around the clock and making progress to clean up the site. Monday morning, the company removed derailed cars over to the side of the tracks so that train traffic can continue. Canadian Pacific also repaired the broken track. 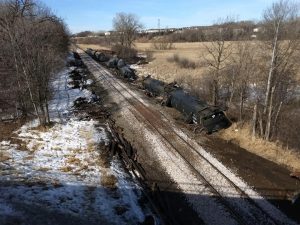 Derailed train cars moved off the track in Plymouth after Sunday’s derailment.

Many people went to check out the scene Monday. Kelly Oberstadt lives in the neighborhood, not too far from where the train derailed. She was surprised to see the train cars flipped over on their sides.

“There were definitely some cars on the track, too. You can tell the rail itself was off in some parts, like it was broken,” Oberstadt said.

According to Plymouth police, 22 train cars derailed, with 16 of those cars loaded with lumber, asphalt and molten sulfur.

“They did find overnight one of the train cars did have a crack in it, but there was no leakage because that molten sulfur had cooled off to the point where it had solidified,” explained Plymouth Police Chief Erik Fadden.

“There are no worries in terms of air quality in terms of anything leaking into the soil or the water,” said Fadden.

No one was hurt in the incident. Plymouth Police ask residents to stay out of the area for safety reasons because there’s a lot of heavy equipment in the area.