Although there was no playbook for the 2020 Election Season, city clerks and elections staff knew a year ago that this season would be a big one.

“Presidential elections are huge and we do start preparing in November for the year preceding the election itself,” said Sandy Engdahl, Plymouth city clerk.

But when COVID-19 hit in the spring, elections staff had to shift to start preparing in ways they’d never done before.

In Robbinsdale, staff installed a plexiglass barrier in time for primary voting. Maple Grove stocked up on masks and extra extension cords that would make machines work as people spread out to vote in larger spaces, like city council chambers. Maple Grove also brought out a trailer for people to drop off mail-in ballots. New Hope developed a plan to disinfect voting booths and Brooklyn Park emphasized their curbside voting option as a way to keep people out of buildings. Plymouth rented a tent so people could vote outside when the weather is nice. 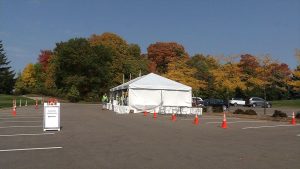 The city rented a tent that allowed people to vote outside in the fresh air from Sept. 18 to the Oct. snowstorm.

But then clerks had to accommodate record-high voting. Many suburbs reported high turnout numbers. In Maple Grove, staff expected to accommodate more than 1,000 voters a day during early voting.

“So it’s definitely been extra work but those of us who work in elections love the process we love the people,” said Jamy Hanson with Maple Grove elections. “We love the excitement, so this is kind of like Christmas. We are really enjoying it.”

“It’s gratifying to me because I spend my whole year planning this,” said Engdahl. “I love it when people turn out to vote. I just love it.”