The election isn’t for another 46 days, but Minnesotans wanting to cast their ballots early are now free to do so. plenty of people did just that at Maple Grove City Hall on Friday, Sept. 18.

“It is something that you grow up watching your parents do, and then as you get older you get to watch your peers who are a little bit older than you get to vote,” said Joseph Phelan, a student from Maple Grove voting in his first general election. “And to finally be a part of that, and so when someone asks you, ‘did you vote?’ You get to enthusiastically say, ‘yeah I voted.’ It just feels really good. you finally feel like a full American citizen.”

Phelan was one of several hundred people who made their way to Maple Grove City Hall on Friday to cast their ballots on the first day of early voting.

Election workers say people were lined up when doors opened at 8 a.m. 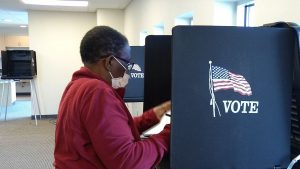 Maple Grove City Clerk Amy Dietl says Maple Grove voters requested more than 16,000 absentee ballots so far, but they anticipate that a lot of those people will want to vote in-person rather than putting their ballots in the mail, so the city is trying to accommodate them as best they can.

If people already requested an absentee ballot by mail and prefer to vote in-person, election workers on site can perform a process called “spoiling the ballot,” where they issue the voter a new ballot at city hall. Voters can destroy the ballot they initially requested to be sent to them in the mail once they receive it.

Meanwhile, the city has safety protocols in place such as plexiglass barriers and sanitized pens. Tables and voting booths are also spaced out to maintain social distancing.

Early voting will be available at Maple Grove City Hall Monday-Friday from 8 a.m. to 4:30 p.m. through Nov. 2.

“This is definitely an exciting year,” said Jamy Hanson, a Maple Grove elections worker. “We thought it was going to be exciting simply for the fact that we had three elections this year and it was a presidential year, and now we’ve thrown a pandemic into the middle of it. So it has definitely been some extra work, but those of us that work in elections truly love the process. We love the people, we love the excitement, and so for us this is kind of like Christmas. We really are enjoying it.”

The city has also borrowed a trailer from the Maple Grove Fire Department and parked it out in front of city hall. Anyone who received their absentee ballot by mail can drop off their completed ballot at the trailer during normal business hours without having to go inside.

For more information, you can go to the city of Maple Grove’s website.