Some of those changes include hiring “interveners” to act as a go-between for protesters and law enforcement.

Edwards said the city would also hire cleanup crews to remove trash left behind by protesters. The cleanup crews would come through in the morning before morning live-shots.

The city also hired a team to help with communication.

On Thursday, additional barricades went up outside of the barricades already in place outside the Brooklyn Center police station. By Friday, they were covered with air fresheners. 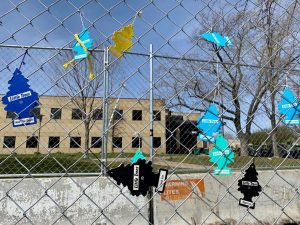 Hundreds of air fresheners now on fence outside Brooklyn Center police station, referencing what Daunte Wright told his mother on phone before he was killed.

Edwards said there are plans to put up plywood at the site so people can express themselves in art as one of several ways to make the area “a healthy space.”

Additionally, the city says they will be creating opportunities where the public can interact with law enforcement, city staff and elected officials.