Nearly one a year ago, Daunte Wright was killed during a traffic stop when a former Brooklyn Center police officer mistook her gun for a taser.

Now, a series of events will commemorate the young man who died on April 11, 2021.

On Saturday, the Earle Brown Heritage Center in Brooklyn Center will host one of two planned events to commemorate Daunte Wright. They’re calling it his “Angelversary.”

“It’s hard, so if I keep my mind busy, then I don’t think about it as much,” said Katie Wright, reflecting on the one-year anniversary of her son’s death. “And I think that stuff like this [event] helps me get through it.”

One year after that unthinkable tragedy, Katie and a group of friends, family and people from various community organizations are coming together to celebrate Daunte’s life.

“I want it to be a fun event and a time to celebrate because Brooklyn Center, we’re making change and we’ve paid a big price to do that,” she said. “But you know what, we’re going to move forward and we’re gonna continue to stand together.”

An image of Daunte Wright will greet the visitors of this free event, which goes from 6 p.m. to 10 p.m. on April 9. 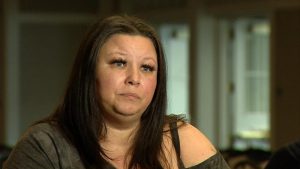 Katie Wright, Daunte Wright’s mother, spoke to CCX on the weekend of the anniversary of her son’s death.

Daunte Wright was 20 years old when he was fatally shot by former Brooklyn Center police officer Kim Potter. His mother wants everyone to remember who her son was as a person.

“Daunte was loved. He was our son,” Katie Wright said. “He had his whole life ahead of him, and the day that his life was taken from us was tragic.”

It’s a tragic event that will forever be a scar on the city, yet Katie Wright has now devoted her life to making sure that his death wasn’t in vain.

“That is the most powerful thing that I’ve learned,” she said. “A tragedy like this does turn into some piece of positivity, meaning community change, and that’s what helps us.”

Meanwhile, there’s another event scheduled for Monday, April 11. There will be a barbeque and a candlelight vigil at the sight of the Daunte Wright memorial in Brooklyn Center at 63rd Avenue and Kathrene Drive from 5 p.m. to 9 p.m.

The city will close the road to traffic in that area beginning at 4 p.m. on Monday.