For the second straight year, people accustomed to catching the Minnesota State Fair Express bus in Brooklyn Park will have to find another option to get to the Great Minnesota Get-Together.

Metro Transit announced it is scaling back State Fair Express bus service yet again due to a shortage of drivers. The transit agency currently has 1,100 bus drivers on staff, but has room to hire 300 more.

Fair-goers can still go to one of three park-and-ride lots in Minnetonka, Bloomington and Cottage Grove. 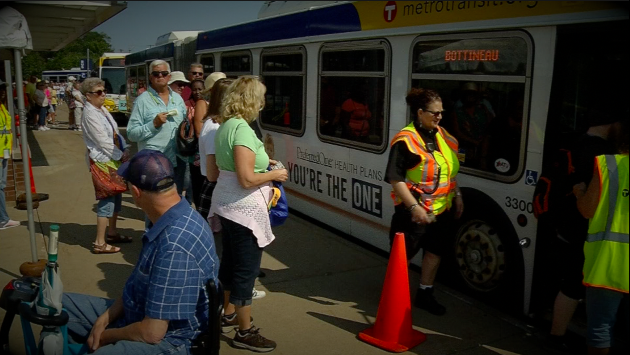 In past years, people could hop on the State Fair Express Bus in Brooklyn Park at 63rd Avenue and Bottineau Blvd.

However, Metro Transit officials also encourage people to consider one of the normal transit options to get to the fairgrounds.

“If you’re coming from one of the northwest suburbs, you could take the C Line to downtown Minneapolis, transfer to the Green Line, ride the Green Line to Snelling and University, and then hop on an A Line,” said Laura Baenen, a Metro Transit spokesperson. “And that goes right by the fairgrounds on Snelling.”

For more information on the different ways you can get to the fair, you can go to the Metro Transit website. Metro Transit officials also encourage people to sign up for rider alerts to monitor bus and parking availability at the park and ride lots.