Brooklyn Park is a step closer to operating as a full-time fire department instead of a paid on-call department. The first class of eight cadets finished up an intensive two-day round of training this week.

“The goal is we want to throw as much as we can at them to test everything they’ve learned in the last six months and make sure they are ready to hit the streets,” said Fire Chief John Cunningham.

For example, during one training session crews had to use a tool to extract victims from a car, respond to a shooting, and then go through multiple fire scenarios.

Cunningham described the training as “intense.”

“We started this journey well before COVID. Now we’re excited that after six months of training, we’ll be ready to graduate,” said Cunningham. 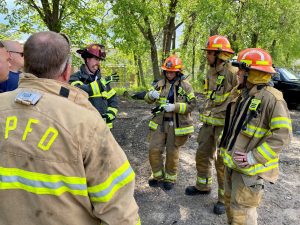