Opening a restaurant in the middle of a pandemic wouldn’t be the ideal situation for most people, but that’s a different story if your restaurant sells tacos.

An analysis by Top Data found that taco consumption increased by nearly 13 percent during the pandemic.

In the Twin Cities, there’s plenty of options when it comes to Mexican restaurants, which is why it’s important for someone breaking into this market to stand out above the rest.

“This would definitely be my go-to Mexican restaurant in the metro, without a doubt,” said San Bernards of Brooklyn Park.

Dos Hermanos Mexican Grill & Bar has been open since December. If you ask Bernards, they have customer service down pat.

“They greet you right at the door, and whatever you need they’re going to get for you right away,” he said. “And they just make you feel like you’re at home.”

Customers who step into this new restaurant will see that the menu has a variety of options. 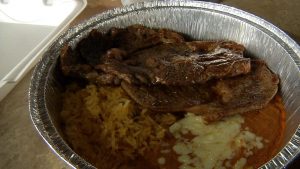 Steak, rice and beans at Dos Hermanos in Brooklyn Park.

Basically, Dos Hermanos serves anything you’d expect from a Mexican restaurant, and a little bit more.

“Our menu’s pretty big, you know, but we kind of hit all of the spots. We have a little bit of everything,” Rivera said.

Rivera is a 20-year old part-owner of Dos Hermanos. The name of the restaurant means “two brothers” and refers to Rivera’s father and uncle. They had once planned on opening a restaurant together, but Rivera’s uncle died at a young age and that dream was never fulfilled.

“He was like 26, 27 I think,” Rivera said. “And my dad always had a little piece of the heart there. And he decided to name [this restaurant] Dos Hermanos in his memory.”

Now, this 2018 graduate of Osseo Senior High gets to honor his uncle’s memory by providing food, drinks and comfort to a growing customer base.

“I mean, their chips and salsa is probably one of the best in the metro in my mind,” said Bernards, the customer. “And their guacamole is freshly served as well. Throw back a beer and a margarita with that and you’re set and solid.”

With patio season right around the corner, and restaurant restrictions easing up, Dos Hermanos hopes to be a go-to gathering spot in Brooklyn Park for the foreseeable future.

“Our plan is to stay here for many, many years, if possible,” Rivera said.