Brooklyn Park Woman Speaks Out Against Asian Hate: ‘I’m Not Going to Be Silent’

The shootings of eight people, six of Asian descent, last week in the Atlanta area might have been more than 1,000 miles away, but the crime reverberated here in the northwest suburbs.

The incident struck a chord with many of our neighbors, some of whom told us they are fearful of anti-Asian hate.

A statistic from the Minnesota Department Of Human Rights shows that since last April, approximately 7 percent of the department’s COVID-19 related calls are reports of alleged anti-Asian Pacific Islander bias and discrimination. 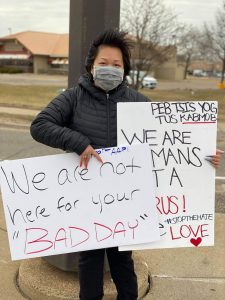 “People do hate on Asian people right now because of the virus,” said  19-year-old Monica Yang of Brooklyn Park. “I’m not going to be silent.”

For the past week, Yang has stood at major intersections in Brooklyn Park and St. Paul spreading awareness. Monday, she was at West Broadway and Brooklyn Boulevard where she held up a sign that said, “We are humans, not a virus… one love.”

Yang, who is Hmong American, says she felt compelled to act after the shootings in Atlanta last week where a gunman fatally shot eight people, including six Asian women.

“It made me really angry. It just hurts me that someone would choose to go places just to kill them, shoot them, and at the end of the day, you’re having a bad day. That’s not okay,” she said.

Yang says she too has faced hatred while campaigning for peace.

“I had this one lady try to spit at me,” Yang said.

However, some people are standing in solidarity. “We’re all human, and nobody deserves that,” said Issac Henning of Brooklyn Park, who walked up to tell Yang he supported her.

Brooklyn Park officials say they haven’t received any anti-Asian hate or bias reports, but Yang says she hasn’t felt safe since the pandemic started. Digging into her purse, she said, “I’ve got my pepper spray.”

The national group Stop AAPI Hate reported 42 incidents of anti-Asian bias in Minnesota over the past year. For Yang, the statistic is a dark reminder of what people who look like her face every day.

“People are scared. They don’t want to come out here because they might get attacked,” Yang explained.

If you experience or witness an incident of discrimination or bias in Brooklyn Park, call the Brooklyn Park Human Rights Commission at 763-493-8005 or submit online.