A Brooklyn Park woman has died after an ATV carrying her and two other family members broke through the ice in a north-central Minnesota lake.

According to a report from the Hubbard County Sheriff’s Office, Kenneth Peterson, 61, of Brooklyn Park, was operating a 2021 Polaris Ranger with an enclosed cab when it broke through the ice into about 18 feet of water. Rose Peterson and the couple’s daughter, Karissa Peterson, 29, were passengers. The family was returning to their cabin at 6:18 p.m. Saturday after ice fishing.

The couple’s son, Ryan Peterson, 36, of Coon Rapids called in the accident to authorities. He had seen all three of his family members come to the water’s surface. The report says he pulled his mother, father and sister out of the water and onto the ice. He then tried to perform CPR on his mother, who was unresponsive. Two other family members following the ATV on snowmobiles also witnessed the accident.

Rose Peterson was transported to the Bemidji hospital and then airlifted to a hospital in Fargo, N.D., where she was later pronounced dead.

There were two other reports of ATVs falling through lake ice around the state over the Christmas weekend. No injuries were reported in those accidents that occurred in Kandiyohi County and Stearns County. 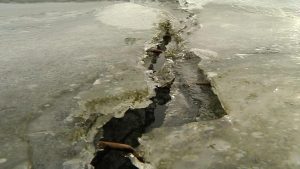 In the northwest suburbs, the Hennepin County Sheriff’s Office also warned about “a lot of close calls” earlier this month involving thin ice.