Some Brooklyn Park residents are calling for more safety improvements at a park with a recent uptick in crime. According to police, so far this year there have been 42 calls for service at Brookdale Park.

Dozens of Brooklyn Park residents met Tuesday night to sound off about crime at their neighborhood park.

“It’s just like this private little wonderland to do whatever you want back there,” said one woman. 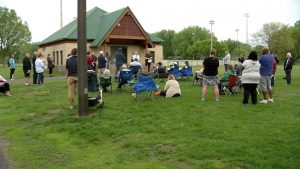 Several recent incidents at Brookdale Park have occurred, including two shots-fired calls and another case where a person fled the scene after giving police false information during a traffic stop. According to police, six crimes have occurred so far this year at the park.

“The third crime was a weapon that was recovered in the park,” said Brooklyn Park police Inspector Elliot Faust.

A few weeks ago, Brooklyn Park police installed a mobile trailer camera and increased patrols. The city also blocked off the back parking lot with concrete barriers to cut down on criminal activity and the city is replacing roundabouts with speed bumps.

Pointing to a speed limit sign, a woman said, “that 19 mph speed limit, you might as well take that sign down because it doesn’t mean nothing! I’ve seen them come through there 40 -50 miles an hour.”

Overall, residents seemed comforted by the current plan to reduce crime here. Police and park officials say keeping everyone safe is a top priority, so families and children can enjoy the park.