Local snow plow crews geared up ahead of the blizzard-like conditions Friday. Forecasters say the Twin Cities metro could see between 6 to 9 inches of snow.

The Brooklyn Park Public Works Department prepared trucks and equipment on Thursday. Officials said pre-wetting roads won’t be necessary, instead crews will wait for the snow to fall and then go out and start plowing. 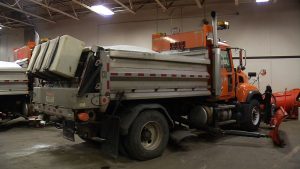 The City will have 15 to 20 snow plows out on Friday. Overnight, the city will have 35 to 40 trucks. Public works officials said there will not be a lot of salting until the snow subsides on Saturday.

“Our goal this afternoon to the early evening is to try to maintain our primary and secondary streets and try to keep those open because it takes a couple hours to plow those,” said Steve Nauer, Brooklyn Park Street and Fleet Maintenance Superintendent. “At some point, we’re going to have to let our guys go and get a few hours a sleep and then we’ll be starting overnight, it might be midnight or 2 a.m., it’s gonna be overnight.”

Nauer hopes drivers will stay inside, as it could become challenging for snow plow crews.

“Sometimes when we get a lot of snow, vehicles go out because they think they can but they can’t. They end up getting stuck in the middle of the road and that can obviously be a challenge,” Nauer said. “We’ll certainly be planning a snow emergency for tonight, so hopefully people heed that and make sure they’re not parked on the streets.”

Nauer said following the heavy snow, there will also be high winds in the area. That means crews will be back out on Sunday to clean up the areas where drifting occurred.

Because there likely will be white out conditions, officials caution drivers to drive slow.

Public works crews will be going out again this next week to push back some of the snowbanks.