Brooklyn Park police are testing out a new crime-fighting tool. Eight officers are part of a pilot program that kicked off in November.

It’s called the BolaWrap.  The device kind of looks like a stun gun, with a laser attached. But, instead of bullets, it spits out an eight-foot cord with hooks on end. 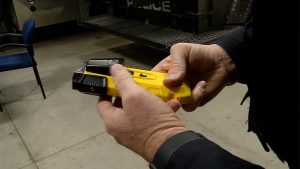 The primary purpose of the BolaWrap is to restrict movement and to give police enough time to take someone into custody.

Officers Tim Mitchell and Paul Donahue gave us a demonstration. First, they aim at a laser at a mannequin, targeting either the feet or waist area. The BolaWrap sounds like a real gun when launched, so police give a warning first.

It can be shot up to 25 feet. However, the BolaWrap works better when it is in a range between ten and 18 feet of the target.

“Once you get past that 25-foot range, the line is going to become completely unstable, and it’s probably not going to work effectively,” explained Paul Donahue.

Officers say the BolaWrap has it’s cons. It can’t be fired in a crowd or when it’s near other objects. But, police say it’s excellent tool to use on people who are in a mental crisis or on people who aren’t armed.

Brooklyn Park Police will complete a one-year deployment and reevaluate its use and effectiveness. There are no immediate plans to go department-wide. Each BolaWrap cost about $900.