Brooklyn Park police are asking for the public’s help finding a driver who struck a 17-year-old boy last Thursday night at the intersection of Winnetka and 63rd Avenue North.

Savion Coleman was riding his bike home with a friend when he said a large white SUV came out of nowhere at about 9:30 p.m.

“I was halfway across the street when I noticed the cars that were supposed to stop weren’t stopping. They were just going faster instead,” said Coleman. 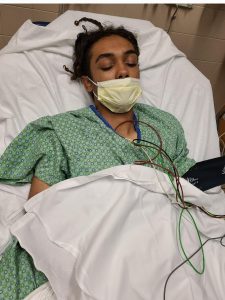 According to Brooklyn Park police, the driver had his left turn signal on but, for some reason, suddenly veered right, hitting Coleman.

“He hit my friend and me, and I liked rammed into my friend, and he rolled over my leg, hit my head on the curb, and right after that, I was out cold,” recalled Coleman.

Coleman’s bike got tangled underneath the SUV and was dragged a few feet.

“I went up and started banging on the window, like ah, there’s somebody under your car,” said Michael Fulton, Coleman’s friend. “He kept going for a little bit down the road, and then they stop and get out, asked if he was okay. Obviously, he’s not and then got back in the car and just left.”

The Brooklyn Park teen was hospitalized with concussion and leg injuries. He says no other drivers stopped to see if he was okay. Meanwhile, He’s hoping the driver will do the right thing and be responsible for his actions.

The Brooklyn Park Police Department is looking for large white SUV with front-end damage on the right side. Anyone with information is urged to call police.