Brooklyn Center police are looking for a hit-and-run driver who struck a teenage boy while he was riding his bike. The incident happened around 4:30 p.m. Sunday at the intersection of Brooklyn Boulevard and 55th Avenue North. That’s near the Falafel King and Arby’s restaurants.

“He was afraid to tell us. His face was red, and he wasn’t saying anything, but he just looked off,” said Wade Staebell, Seth’s father.

The teen was attempting to cross the intersection at Brooklyn Boulevard and 55th Avenue North when a car in the opposite direction turned left and hit him, sending the boy flying into the street.

“He was thrown into the intersection on Brooklyn Boulevard toward Highway 100. He was dazed and just sat there, “said Dina Staebell, Seth’s mother.

The female driver stopped for a minute, but then quickly left the scene while the boy was sitting in the intersection.

“She was like, ‘are you okay?’ And he’s just sprawled on the ground,” said Seth’s mother on the incident.

Seth’s parents say they are appalled that no other driver stopped to help.

“I’m sad that somebody left my son laying there, not just that he was hit, but that no other adult around stopped to help him,” said the boy’s mom. 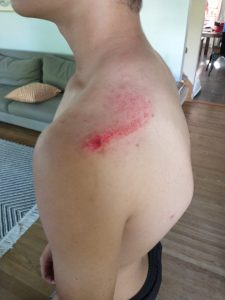 Staebell suffered shoulder and head injuries. He was wearing a bike helmet, but it fell off.

The teen walked about a half-mile with his bike. A good Samaritan did assist him in fixing his tire so he could make it home. Meanwhile, the family wants the driver to come forward.

“Accidents happen, they do, and we need to be accountable to deal with the consequences when accidents happen, but for whatever reason, she wasn’t capable of that at the moment,” said Dina Staebell.

Brooklyn Center police are investigating the accident. They urge the public to call with any information to help in the case.