Brooklyn Park police say they had an extremely busy Labor Day weekend responding to shots fired calls and robbery reports. The crime cases are happening in an area of town south of 85th Avenue. 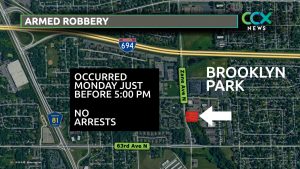 One of the cases is an armed robbery that occurred in an area of the city that has seen a spike in crime this summer. Police responded to a report of an armed robbery in the 6400 block of Zane Ave. N just before 5 p.m. Monday. This is near the Eden Park Apartments. An automobile collision repair shop is also in the area.

According to Brooklyn Park Deputy Chief Mark Bruley, a person was held up by a man armed with a handgun. The robber fled the scene prior to police arriving. Officers established a perimeter, but could not located the armed individual. No suspect description details have been released at this time. The incident remains under investigation.

Meanwhile police also responded to a robbery of woman at about 4:15 p.m. Sunday. The victim told police she was robbed in the 5800 block of 73rd Avenue N. That is near the Huntington Place apartment complex, which has had an inordinate number of police calls in recent years. The woman knew the robbers from prior contacts, police said. The victim chased after them in her vehicle when one of the men fired shots at her car. No arrests have been made in the case.

That same area was where another reported shooting occurred Friday just before 1:30 a.m. Police say an argument had occurred when one of the people involved fired shots. No one was hit. Police were able to arrest a suspect in the Friday case.

Brooklyn Park police also continue to investigate a pair of shootings that occurred Sunday. One of them happened at about 8 p.m. Sunday in the 7600 block of West Broadway. Police found evidence of shots fired and a person struck by one of the bullets. That person was taken to the hospital with what appears to be a non-life threatening gunshot wound. The case remains under investigation.

Police also responded at 1 a.m. Sunday to the 8400 block of Xerxes Avenue N where there were reports of shots fired. Officers learned two individuals who had been struck by gunfire had driven themselves to the hospital. Their injuries also appear to be non-life threatening. Bruley said police were able to make an arrest in that case.

Crime has been a concern for residents and businesses in southern Brooklyn Park. Last week, some Brooklyn Park City Council members expressed their concern and wanted to see what more could be done.