Brooklyn Park police arrested four people in connection to a shooting that happened in the 6900 block of West Broadway on Friday afternoon.

Police say a man fired several rounds and then fled on foot. Shortly after 4 p.m., police shut down several roads in the area. They even used a helicopter and K-9s to try to find the suspect. Police opened up the roads after 9 p.m. They did wind up arresting four people.

Police are still investigating what happened. 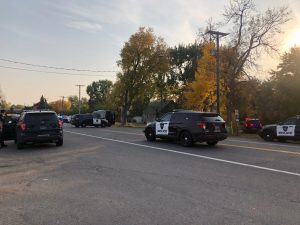