Brooklyn Park is promoting energy-efficient products such as washing machines and irrigation systems. The city will give out rebates ranging from $50 to $100 to residents who buy them.

“With these water-efficient appliances, they’re going to pay for themselves over time,” said Tim Pratt Brooklyn Park’s Recycling Manager. “Just with the efficiency itself.”

Even in the land of lakes, water is precious. That’s why Brooklyn Park wants people to conserve on H2O. When buying appliances, most folks look for a discount or the best deal, but the city is hoping residents change their shopping habits.

“You don’t necessarily look at the efficiency and the cost to operate something over time,” Pratt said. “Hopefully over time we are going to change that mind set.” 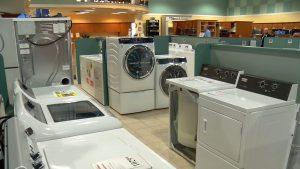 Brooklyn Park has two rebate programs. One focuses on energy-conserving washing machines, toilets and irrigation systems. The other is a program for highly efficient water softeners.

“You might pay a little more up front,” said Dave Carlson, owner of AC Carlson Appliances in New Hope. “But over the long run you save because it costs you less to operate it every time.”

Carlson is a proponent of energy-efficient products.

“You do save on the environment,” Carlson said. “It is green because you are using less of the resources that it takes to operate the machines.”

The only caveat is energy-saving washers and dishwashers take longer to get the job done.

“You are using less water,” Carlson said. “So we’ve got to compensate to get the clothes or dishes clean by adding time.”

However, with a rebate tossed in, some believe the pros could  outweigh the cons, because it means people and their city ultimately use less water.

“The rebates are always good,” Carlson said. “It’s a bonus.”