Geno Okok is spray-painting a mural in a part of Brooklyn Park that has seen a rise in violence over the last few years. The incidents include a man who was fatally shot last year at a nearby convenience store.

“I’m hoping that this mural would have people at peace,” said Okok.

The Brooklyn Park resident is using Waterside International Market, an ethnic grocery store located at 7500 Brooklyn Boulevard, as his canvas. He’s hoping the bright colors will lift the spirits of the neighborhood.

“Maybe if someone was having a bad day, and they’re just walking past, and they just see it and they see kids smiling, maybe that would change their mood,” said Okok.

The artist has painted the faces of Brooklyn Park’s youngest residents for the past week.

“I feel like kids are really empowering. They have a strong message that a lot of us pretty much forget when we become adults,” explained Okok about his mural design. “They don’t necessarily see a person as like the color of their skin or their race. They judge you by character.” 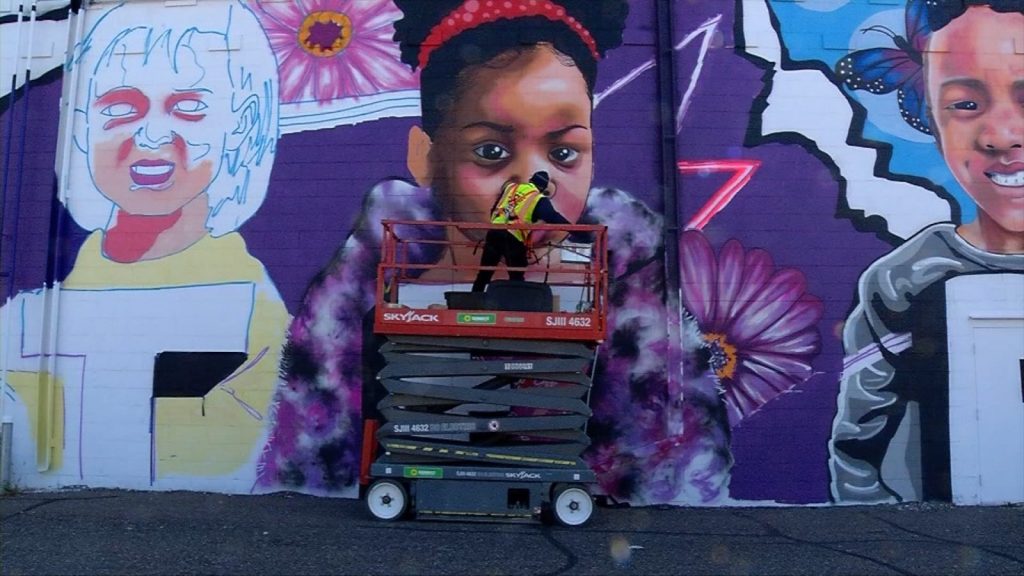 “It’s very windy, so pretty much 80 percent of my paint has gone with the wind.”

But he says it’s worth it if the mural promotes unity and inclusivity.

“I want people to have that community pride. To feel like, ‘yo, this is Brooklyn Park. This is my neighborhood. This is where I’m from,’ and look at how beautiful Brooklyn Park is becoming,” said the Park Center grad.

The mural should be finished sometime next week. Okok received two art grants totaling $10,000 to use for the project.