A man is dead after a shooting outside a convenience store Tuesday night in Brooklyn Park.

Police say that shortly before 10 p.m., a 22-year-old man was walking into the Nice Family African Market store at the corner of Regent Avenue and Brooklyn Boulevard when someone sitting in a vehicle opened fire and struck him.

“There was five or six shots, and then I thought it was just like, a firecracker,” said Ice Yang, a nearby resident. 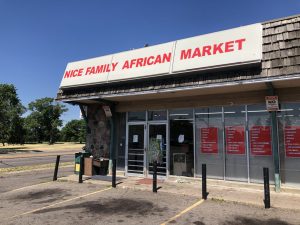 The shooting happened Tuesday night outside of the Nice Family African Market in Brooklyn Park.

Investigators say the victim got into a vehicle that was being driven by his girlfriend. Officers found the car nearby with the victim in the back seat. They tried to render aid to the man, but he later died at the hospital.

“What always concerns us in a public place like this with a shooting was the bullets that missed went through the glass, into the store,” said Deputy Chief Mark Bruley of the Brooklyn Park Police Department. “There was a pretty large group of youth in the store, and the bullets narrowly missed striking them. So innocent victims are a big concern for us in these type of interactions.”

Investigators say the shooter was a black male in a silver vehicle. They’re not sure of the motive, but police believe the victim was targeted.