A Brooklyn Park man died when the vehicle he was driving collided with a truck, police said. The crash happened shortly before 8:20 a.m. Saturday at the intersection of West Broadway Avenue and Candlewood Drive. 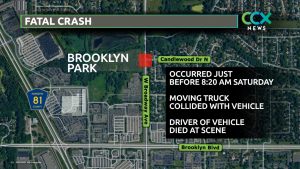 According to police, the man was in a Honda Accord making a turn from Candlewood Drive onto West Broadway when it was struck by a box truck, similar to a moving van. The man, age 25, was pronounced dead at the scene. Authorities have not yet released his identity.

West Broadway was closed for several hours Saturday due to the crash. The Minnesota State Patrol and the Hennepin County Sheriff’s Office assisted with the investigation. The Brooklyn Park Fire Department and North Memorial Ambulance also responded.