Brooklyn Park fire officials are trying to determine what caused a fire at the Autumn Ridge Apartments, located in the 8500 block of 63rd Ave. N. The fire occurred Monday at around 5 p.m. At least five different agencies responded to blaze that went to three alarms because of the tropical-like heat on Monday. 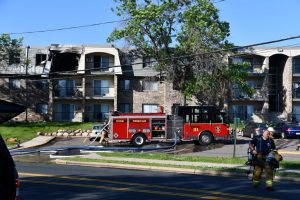 Resident Bendu Saysay lives next door to where the fire started. She’s glad a Brooklyn Park police officer spotted the fire and alerted residents. She recalled the tense moments when others urged her to evacuate.

“There was a police officer that was on another incident, and he actually noticed it and initiated a fire response right away,” said Brooklyn Park Fire Chief John Cunningham.

When crews got on the scene, they could see flames on the second and third-floor balcony, which quickly spread inside the units. Fire crews also used aerial trucks to put out the fire. 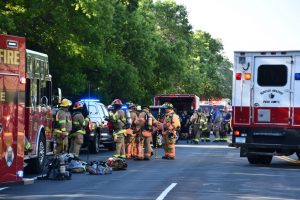 Fire crews also had to fight extreme heat. They rotated teams in and out of the hot weather. One firefighter was treated for heat-related issues.

No residents were hurt in the fire. However, several families are displaced. The Red Cross is providing assistance for those families.