A Brooklyn Park family is trying to get back on their feet after lightning destroyed their home last month. The Bergemann family says a giant lightning bolt rocked the house after striking a massive cottonwood tree in their back yard.

“I was afraid,” said 9-year-old Keira Bergemann. “Right when I heard the bang, I ducked and stuff started falling on me.”

Although it’s been a month, the cleanup and restoration are slow going. Sheetrock and debris are scattered throughout the home. Ken Bergemann says his insurance company, Safeco Liberty Mutual, is leaving the family in limbo.

“Everything came to a screeching halt after that first week, and literally, nothing has been done inside the house yet,” he said. 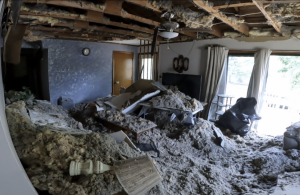 The inside of the Bergemann home looks like a warzone after a lightning strike in May.

Bergemann says it’s estimated to cost about $20,000 to remove the damaged tree. The family is worried more destruction could happen if the tree stays.

“If that tree falls, it will take somebody’s life in that house,” he said.

The homeowner wants the insurance company to pay for removal, but that’s not likely to happen. CCX News reached out to Liberty Mutual and told us the company does not publicly discuss individual claims.

A spokesperson for the Insurance Federation of Minnesota says homeowner’s insurance policies don’t insure fallen trees unless it’s on the home.

“This is a case that’s a little different, though, because it’s a very large tree right next to the home, and so there could be danger, further danger to the home from the tree, and in that case is likely to pay to trim the tree or make it, so that’s not a danger anymore,” said Mark Kulda, vice president of public affairs for the Insurance Federation of Minnesota.

Meanwhile, the family wants to get back to normal. The family has set up a GoFundMe to help cover costs.

“My life right now is revolved around trying to get things done at this house, not spending time with my daughter,” said Bergemann.