The city’s Economic Development Authority recommended approval of the $20 million project, which would be built on Brooklyn Boulevard near Zane Avenue in the Village Creek Redevelopment area. The area has been targeted for revitalization since the early 2000s. 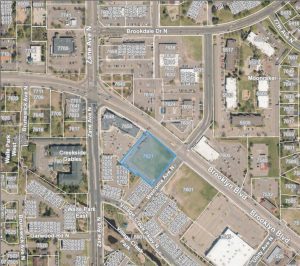 Former professional basketball player Devean George’s George Group North is helming development of the five-story Village Creek Apartments. The complex will have 83 apartments in a mix of one, two, and three-bedroom configurations renting to a mixed-income community. About 18 apartments will be considered affordable, which means the units cost 50% of the area’s median income.

On the first floor of the building, a 10,000-square-foot space will be dedicated to business incubation. This will include a commercial kitchen that budding food service entrepreneurs can rent at low rates to make products and test concepts. The kitchen will be managed by Twin Cities-based chef Lachelle Cunningham and will include a restaurant called Chelle’s Kitchen.  The developer anticipates that kitchen will also be available to rent for up to six different food businesses at a time, with the hope that they can use the low cost of rent as a booster to their business growth.

Cunningham is slated to hold food workshops and classes for professionals as well as the general public when the restaurant or incubator is not in use. The overall concept is one which the developer says has benefits for everyone involved. 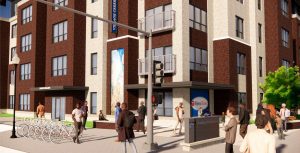 “I believe everybody wins,” said George. “I believe the city wins. I believe the developer puts a good project out and I believe most important the community wins. The kids win, the families in the area win.”

The development concept got an enthusiastic reception from most of the EDA members, enough to earn it a unanimous approval. The city will chip in to the project by signing the land, currently owned by the city, over to George Group North, as well as implementing tax increment financing to help subsidize the development. The proposal now moves to the next steps, which include a public hearing to be conducted later.

If all goes as planned, groundbreaking on the property could start as early as this fall with construction beginning next year.