On an unseasonably warm winter day this past week with highs in the 60s, Minnesotans were making the most of their opportunity to get outside.

Beautiful day for a walk, yeah,” said Sarah Brume, who was out walking on the Shingle Creek Regional Trail in Brooklyn Park.

Paved walking trails are certainly one way to get people out of the house. It’s one reason residents asked for more access back in 2015 when the city developed its Pedestrian and Bicycle Plan.

The city wanted to make this area more attractive to bicycles, yet figuring out the best way to do that was up for debate at Monday’s city council meeting.

One scenario would be to create a dedicated bike lane on Xerxes Avenue.

“The result of adding bike lanes would be you would have to remove parking on one side of the street,” Struve said.

The other option would be to use the shoulder as a designated bike route and add some additional signage. This option would cost the city $7,000 less than adding a bike lane.

Yet one of the downsides of having a designated bike route is that bicycles will have to share the shoulder with parked cars. That means bicyclists will have to be on the lookout for people opening their car doors.

Ultimately, the city council decided to go with the bike route option, which means that everyone in this area will have to be on alert.

“Absolutely, bikers as they move through that route, they need to take caution if they’re moving around a vehicle,” Struve said. “And the same with people that are parking, look before you open your doors. Be courteous of each other.” 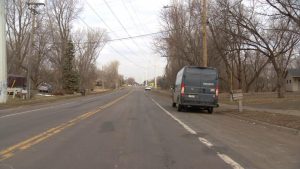 Bicyclists will have to share the shoulder with parked cars under the bike route scenario.

Safety aside, the hope is that the plan to create a designated bike route will get more people out of the house to enjoy Mother Nature.

“Being outside is good for us all,” said Julie Schreifels, who works in Brooklyn Park and was out enjoying the Shingle Creek Regional Trail.