Tragic incidents are bound to happen in every city, and for parts of five decades, Todd Seitz has been on hand to answer the call in Brooklyn Park.

“We’re there to help people,” said Seitz, the deputy fire chief of the Brooklyn Park Fire Department. “If I had to make the ultimate sacrifice, that’s what I’d do.”

Seitz joined the department in 1986 as a 19-year-old looking to fulfill a dream in his hometown.

“Got a phone call from then district chief who called me and asked me to meet him up at the fire station,” Seitz said. “So I did, and my interview lasted all about four minutes. He said, ‘Training starts on Saturday. Show up.’ And I did. And the rest is kind of history.”

He showed up and stayed for the next 36 years.

“I worked my way up through the ranks. I’ve held every position in this department, except fire inspector,” he said.

Over those years, he accomplished heroic feats.

“I got to deliver a baby in the field. I’ve been involved with rescues,” Seitz recalled.

In other cases, he encountered traumatizing situations.

“There was an incident that involved a bride and groom, an accident on the freeway, that the bride died,” Seitz said. “And that was a hard, hard incident.”

It’s a career that’s had more good days than bad. Yet there comes a time for every firefighter when they have to hang up their equipment for good and spend more time with family.

“They sacrificed a lot of missed meals and missed family events for me to do my job,” Seitz said. “It’s my turn to give back to them.” 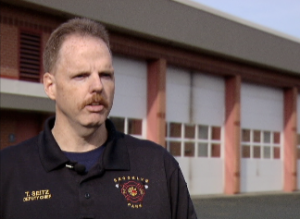 Todd Seitz began working for the Brooklyn Park Fire Department in 1986. He retired on April 27.

But before taking that next step into retirement, Brooklyn Park Fire Chief T. John Cunningham wanted people to know just what kind of impact Seitz has made on the profession.

“There really isn’t a chief in Minnesota that doesn’t know Todd Seitz,” Chief Cunningham said. “He’s an icon. And he’s always been instrumental, not only for Brooklyn Park, but in the technical college system where he was training firefighters in the art of the trade and how to become a better firefighter.”

After a distinguished career, Seitz has earned a well-deserved break.

“I’m hopeful that I’ve left a legacy that people can be proud of,” Seitz said.

Meanwhile, Seitz added that he’s proud of the increased emphasis on mental health for firefighters, which didn’t exist at the beginning of his career. As for what’s next, Seitz plans to move to Texas with his wife to get out of the cold.