Brooklyn Park City Council member Wynfred Russell says he’s heard from people in the community about police reform so he held a listening session about it on Tuesday night. 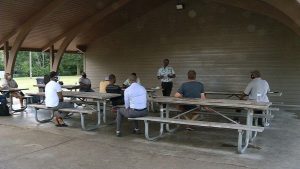 “There are a number of residents here who are really afraid of police. I’m not afraid of the police and I’ve had no problem. But many others are fearful of the police,” said Russell. “We can’t have that in our city, so we need to understand what is driving this fear.”

Russell met with residents in what he called a straight-forward conversation about concerns and ideas for change. Residents discussed ideas that ranged from more accountability to greater community interaction.

“It takes us collectively to make something work. So it’s not just one person not doing their job,” explained Richard Spencer, a community member who attended. “I think it’s kind of like a soup, multiple ingredients that are not working.”

Russell mentioned the community listening session is just one of many conversations that would need to happen before any changes are made in policy.

The Brooklyn Park City Council and Brooklyn Park’s Human Rights Commission are hosting a virtual listening session on police reform Aug. 18. For more information on how to participate, click here.