After a six year hiatus, the Brooklyn Park Community Foundation has relaunched with a mission to better connect and better support the community. The Foundation is a 501c3 created by former Brooklyn Park mayor Steve Lampi.

“We shelved it and my thought was we would eventually need it for something,” said Lisa Jacobson, current city council member who then served as president of the Foundation. “With the murder of George Floyd, we thought this is that something.”

Jacobson hopes the Foundation can better connect residents and serve the diverse populations of Brooklyn Park. She now serves on the steering committee and says the Foundation hopes to raise enough money to hire an executive director.

The Foundation celebrated the relaunch on Saturday, Oct. 11 in the gazebo near the Community Activity Center. They announced the first initiative, which is creating the concept of the Community Foundation as a hub, where the city, organizations, schools, and faith organizations are different spokes on the wheel. 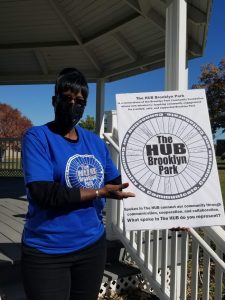 “It’s an effort to make us even more united and learn about what everyone else is doing and support each other,” said Jacobson.

One example is when volunteers were needed to build a playground at Excell Academy in Brooklyn Park. The Community Foundation promoted the event on its Facebook page.

“If you are looking for a way to engage, this is it,” said Jacobson.

Jacobson says this would be patterned after similar initiatives in Las Vegas and Florida.

You can connect with the Brooklyn Park Community Foundation by following the group’s Facebook Page.