On March 21, Nancy Fuller was supposed to get together with a group of friends at Cornerstone Church in Crystal for a game night to celebrate her 65th birthday.

Fuller sent out invitations weeks in advance via Facebook to more than 60 people.

Then, the novel Coronavirus hit and ushered in a new era of social distancing, forcing Fuller to cancel those birthday plans.

“I’ll be honest, I was disappointed,” Fuller said. “Just thinking I had a big party planned for my big birthday.”

Disappointment is a common emotion for anyone who had important events on their calendar prior to the outbreak of COVID-19. But Fuller’s friends from church weren’t going to let a pandemic deprive her of a birthday celebration.

“We were sitting around Saturday morning, my wife and I, and my wife goes, ‘We should just do a parade for Nancy and get a bunch of people together and drive by her house,'” said Dan Miller, a friend from Cornerstone Church. “And I looked at her and I go, ‘that’s an awesome idea!'”

The Millers had to act fast on that idea. First, they reached out to Fuller’s family to get the OK, then they proceeded to send out texts and social media posts to everyone who received invitations to Fuller’s original game night gathering.

Next thing they knew, 30 people agreed to meet up for Fuller’s birthday parade. At 6:30 p.m. Saturday,  they gathered in the parking lot of Earle Brown Elementary School in Brooklyn Center, which is a block away from Fuller’s home. 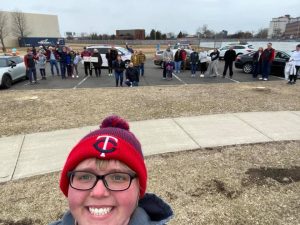 “We decorated our cars, and just drove down the block,” Miller said. “And before we got to the house, my wife ran up to the door and pushed the doorbell.”

When Fuller stepped out of her house, she saw 14 cars lining the street. The occupants of the vehicles honked their horns, yelled and waved signs. After driving up and down the block, everyone got out of their cars to sing ‘Happy Birthday’ to Fuller.

All told, the parade lasted about ten minutes.

“It helped make the birthday more special, just to know that people cared that much about me that they would come out just to drive by, cause some of the people came a little distance,” Fuller said.

“Distance” is a word used often these days as people try to find ways to prevent the spread of COVID-19. But as society adjusts to this new normal, members of a Crystal church made sure that Fuller’s 65th birthday would be one to remember for reasons beyond the novel coronavirus.

“I think everybody is missing that connection, and being able to see somebody live — even if we can’t really hang out with them — was kind of what drove it,” Miller said.

Meanwhile, Fuller said she still wants her game night to happen. She says she plans to organize that once normal life resumes.