A Brooklyn Center woman is among two people accused of entering a looted Brooklyn Park cell phone store and committing other burglaries.

Queensarauniya Beard, 24, of Brooklyn Center is charged with third-degree burglary and third-degree riot. The burglary charge carries a maximum sentence of five years in prison and the riot charge a one-year sentence, if convicted. Also charged is Chylen Evans, 22, of Minneapolis.

According to the criminal complaint, Brooklyn Park police responded to the Boost Mobile store shortly after 5 a.m. Friday, May 29. They received a report of people attempting to break into the store with baseball bats. When officers arrived, windows had been broken and people scattered from the store to vehicles parked out front, the complaint said. 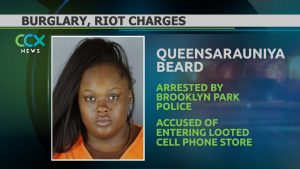 Officers stopped Beard and Evans as they got into a vehicle. Inside the car, police found open containers of alcohol, as well as clothing still on hangers and unopened liquor bottles.

During questioning, Evans stated that she and Beard first went to an unidentified liquor store where they found people looting and decided to put some liquor bottles in their vehicle. They then went to a clothing store with Beard coming out with a large bag of clothes, the complaint said. When they went to Boost Mobile, Evans told police they saw someone break the windows and go inside the store and that she and Beard decided to go inside the store as well. They decided to leave when they saw officers arrive, the complaint said.

Brooklyn Park Deputy Police Chief Mark Bruley said officers arrested five people for burglary and damage to property in Brooklyn Park from May 28 to May 31, the height of unrest in Minneapolis and surrounding communities following the officer-involved death of George Floyd. Brooklyn Center police reported at least 10 burglaries and property damage in their city as well.