Minnesota Governor Tim Walz, state Health Commissioner Jan Malcolm and a pediatric doctor were among those who visited Brooklyn Center Elementary on Thursday.

According to data released Friday, there were 3,378 newly reported cases and 35 newly reported deaths. The state’s seven-day average test positivity rate increased to 8.4 percent as of Oct. 28, up from 7 percent on Oct. 20.

COVID-19 cases at schools have dropped according to preliminary data, but Malcolm said she expects the final data to reveal higher totals.

“Unfortunately, I don’t think the cases are going to continue to drop. In the lag period they’re back up,” said Malcolm, noting that the recent MEA school break may have contributed to some of the backlog of cases.

The lag period is the time it takes for case and lab testing data to be reviewed and reported to the Minnesota Department of Health, usually about seven days.

Malcolm says a lot of the recent spread in cases is happening in younger children and spreading from them to the broader community. 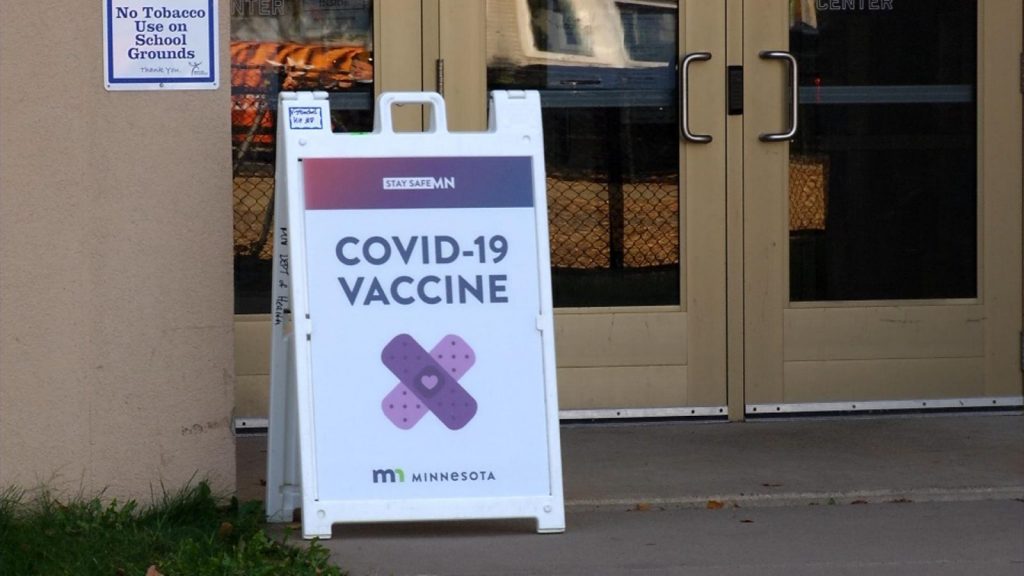 ‘A critical time’ for vaccinations

With the holidays coming up, health officials say it’s “a critical time” for vaccinations. Brooklyn Center School Superintendent Carly Baker says the importance of vaccinations done at her community school is “beyond measure.” Vaccinations for kids ages 5 to 11 began this week.

“As a community school district, we serve a community that has foundationally a significant amount of mistrust for science, potentially for vaccines, and is also fraught with misinformation around the vaccine,” said Baker.

Brooklyn Center Elementary is one of 16 schools around the state currently helping to host vaccinations for students. About 175 young students received the initial dose of Pfizer vaccine Thursday at the school. The Pfizer vaccine for kids is about one-third the dose of the adult version. Vaccinations for younger kids require parental or guardian consent.

Dr. Madeleine Gagnon, a pediatrician at Gillette Children’s Specialty Healthcare, offered assurances for parents who may be hesitant about getting their kids vaccinated.

“This Pfizer vaccine has been well vetted,” said Dr. Gagnon, a mother of young children. “The current study had over 2,000 children in it and there were additional children enrolled that do post-safety follow-up studies.”

Gagnon says there’s more concerns in the medical community about the long-term side effects that COVID-19 may have on children who get the disease. Compare that to the vaccine, which Gagnon says has “very minimal side effects and is very effective.”

“The profile and known facts about the vaccine outweigh the risks of COVID itself,” she said.