John Solomon wants to prove doubters wrong. Following looting and civil unrest in his community, the 26-year Brooklyn Center resident wants his community to shine above the rest.

“This officer pulled me over on three separate occasions, never once did I receive a ticket or any type of citation,” said Branch. “I received nothing more than hostile engagement and interaction.”

Branch and others are calling for a civilian oversight committee for police. There’s also a call to eliminate police stops for petty violations.

Residents like Solomon pushed for a racial profiling bill back in 2000, but without success.

Solomon, a former Washington, D.C., police officer and current school board member, says he has been pulled over 18 times in Minnesota.

“Police violence. I have a real problem with that and I have for a long time because No. 1, as a Black man, it’s automatically assumed that we don’t like the police here. And that’s a total myth,” said Solomon. “We, like, everyone else in this country, want to have safe communities, we don’t want crime around here, but we want to be treated fair and just.” 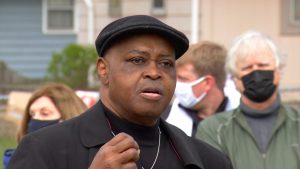 “Brooklyn Center really has been for all of us an example of how diversity thrives,” said Omar. “This is a city where a beautiful fabric, mosaic of beautiful people from all over the world have gathered and created a community where they all can rely on one another and live peacefully together.”